The production of battery includes the manufacture of electrode lug, the assembly of battery, the final injection, sealing, formation and aging process. Each process will have a great impact on the final performance of the battery. The process of activating the positive and negative materials inside the cell by a certain charging and discharging way, improving the charging and discharging performance of the cell and the comprehensive performance such as self discharge and storage is called formation. The formation of the cell is the initialization of the battery and the activation of the active substance of the cell, which is a process of energy conversion.

In the current battery production process, most of the batteries are placed in two flat plates, and then the two splints are clamped by a long tail clip for formation, which has a certain inhibitory effect on the deformation and thickness increase of the battery. However, this method has limited force on the surface of the battery and uneven force. It cannot automatically adapt to the small deformation of the battery, nor can it completely drive out the gas accumulated between the diaphragms, especially large power batteries, while operating The process efficiency is low and it is not suitable for large-scale industrial production.

Another type of formation device is to clamp the battery tabs first, then press it with a connecting strip composed of several small splints, and lock it with a button. Although this method can hold down the batteries in the same row at the same time, a certain production efficiency can be improved. Lithium battery pressure forming machine is one of them. 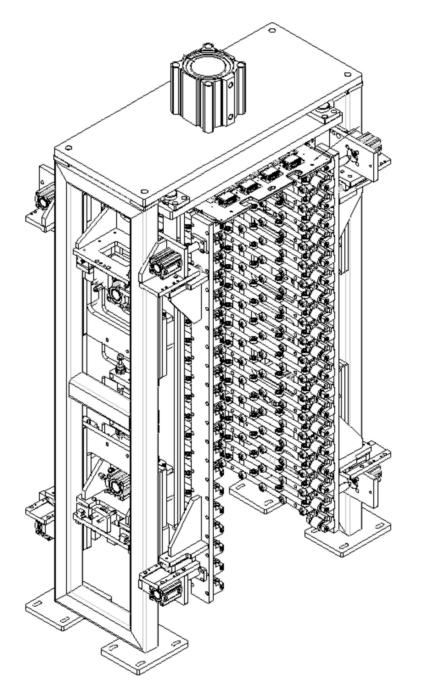 A set of pressure forming machine is configured as: a cylinder, a pressure sensor, several layers of battery heating plate. High temperature pressure forming fixture can be compatible with batteries of different shapes and sizes in a certain range, and the power of the equipment is provided uniformly for the cylinder.(The pressure is controlled by the NITV electrical proportional valve)

4. Heating speed：＜20min（Heating from normal temperature to 60℃ ）

6. Equipment stability：Under charging condition when the current is less than 12A, it can work stably and reliably for a long time.

2. Pressure monitoring of forming battery：Each fixture has a pressure sensor for pressure feedback and micro adjustment through an electrical proportional valve.

1. Preheat the forming fixture before forming to meet the process temperature requirements

2. The lithium battery is fed into the forming fixture through the feeding mechanism.

3. Start the NITV electrical proportional valve actuating cylinde to apply constant pressure to the battery to achieve the required pressure

4. Charge and discharge the lithium battery for many times.

5. In the process, the pressure of NITV electric proportional valve is adjusted in real time according to the process. 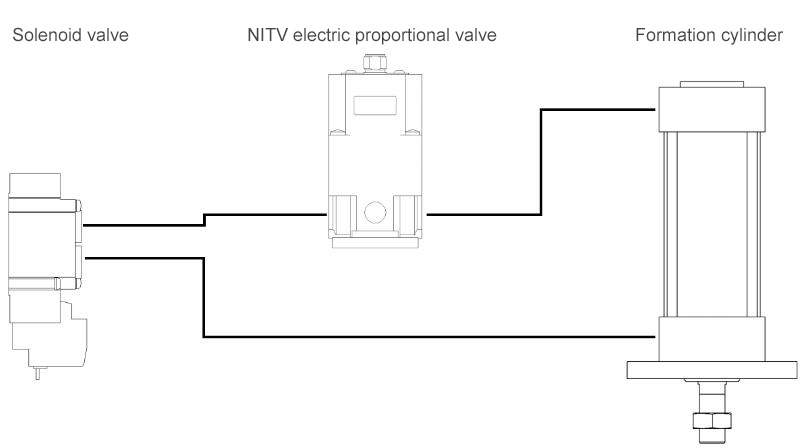 1. When stand by, the solenoid valve controls the cylinder to rise, and the proportional valve is in exhaust state.

The pressure forming machine adopts nitv electric proportional valve, which greatly shortens the formation time,and improves the capacity, high temperature performance and charge discharge cycle consistency of cell. The thickness of the cell is thinner, the appearance is smoother, and the hardness is enhanced. At the same time, the production process is simplified,which greatly saved the manpower and material resources.

It can realize multi-stage heating pressure formation, the temperature and pressure of each section can be set independently

Proportional valve is controlled by analog signals,it can record the pressure curve and formation information of each battery and realize the function of data traceability.